German Innovation Prize for Climate and the Environment

Climate and environmental, innovation competition/Innovation Prize for Climate and the Environment (IKU) for the years 2009 to 2013
Industry
Information
Participation 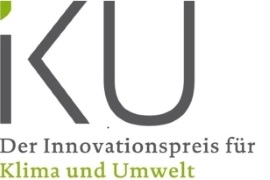 Smart people competing on behalf of the climate and environment

Germany is a pioneer in the field of climate action and environmental protection. This is partially due to the innovative strength of its companies and research institutions. They are constantly coming up with clever ideas for new paths to a more sustainable economy. The innovation award recognises these initiatives.

The Fraunhofer Institute for Systems and Innovation Research (ISI) came up with the idea of developing the existing environmental prize awarded by the Federal Association of German Industry (BDI) into the Innovation Prize for Climate and the Environment (IKU). In cooperation with the advertising agency Scholz & Friends, they developed an attractive competition process with a sophisticated marketing strategy. Since then, the Federal Ministry for the Environment, Nature Conservation, Building and Nuclear Safety (BMUB) and the BDI have run the IKU under the scientific guidance of the Fraunhofer ISI. Every two years, they reward climate- and environmentally friendly innovative technologies in five categories.

A new format in the competition for climate-friendly innovation

Up until 2008, the BDI presented its prestigious environmental award every two years as part of the European competition “European Business Awards for the Environment (EBAE)”. Then, however, the issue of climate change started pushing itself increasingly to the forefront of the political agenda in Germany. Because of this, the Fraunhofer ISI – together with the BDI and BMUB – launched the Innovation Prize for Climate and the Environment (IKU) to highlight and reward outstanding achievements in this area separately. The German prize winners qualify, as before, for the European Commission’s pan-European competition. The new format was launched during the first funding period with annual awards in 2009 and 2010. In the following year, 2011, German companies, research institutes and universities were prompted to participate in the IKU over a two-year interval. Thus, the new award mimics the European event more closely.

Using a good concept to find the best

To ensure greatest possible awareness for the new climate action award, Fraunhofer ISI recruited the advertising agency Scholz & friends as a project partner. The challenge was to persuade potential candidates to get involved in the application procedure. The marketing professionals developed a comprehensive concept which is intended to help identify the most interesting innovations in the field of climate and environmental solutions and to place these in the competition. Their approach included a dedicated logo, a flyer, brochures, an informative web page, a strategy on how to reach multipliers, and a design plan for the evening event.

Determination of the prize winners ...

Between 2009 and 2013, between 70 and 145 institutions applied for each competition. Since the founding of the IKU, the Fraunhofer ISI has been responsible for the scientifically based selection of candidates. The evaluation process is always carried out according to a clearly defined two-stage formula. Initially, the Institute identifies the three best applications in the following award categories:

... by a prestigious jury

The preselected set of the most promising entries is presented in detail to a jury consisting of representatives from industry, environmental groups, politics and the media. Part of this presentation is a detailed fact sheet which characterises the particular innovation. From 2009 to 2013, the jury was chaired by Professor Klaus Töpfer. Alongside him in the decision-making body were Volker Angres of the public TV station ZDF and Franz‑Josef Schafhausen from the BMUB.

Over the period from 2009 to 2013, the award was endowed with 25,000 euros prize money. Since 2011, there has also been a trophy. In 2009 and 2011, the respective Federal Environment Minister and the Acting Chief Executive of the BDI handed over the prize.

The IKU award ceremony is designed as an interesting and entertaining evening event that begins with a reception and speeches. The winners present their award-winning innovations to the audience at the event. In addition, the prize winners and their respective innovations were introduced in a short film.

In the category Technology Transfer, the NGO Engineers Without Borders (“Ingenieure ohne Grenzen e.V.”) won the prize in 2011 for developing small biogas plants that use gas from fermented bananas for providing energy to the rural population in Tanzania, thus providing a healthier and more environmentally friendly solution replacing the traditional firewood plants. The plants can be used to prepare two meals daily.

The company Leibinger GmbH won the prize in 2013 for a product innovation in the area of beverage filling. The company developed a filling system for beverage bottles which saves up to 15 percent of the current costs. The ‘balloon-style’ process makes it possible to fill drink bottles faster using a balloon and without CO2.

Winning the EBAE as the icing on the cake

Three of the six IKU winners in 2009 used the competition as a springboard into the European competition of the EBAE in 2010. The European competition nominated only ten initiatives from all over Europe. The front runners were Zenenergy Power GmbH together with Bültmann GmbH, and ultimately received one of five coveted EBAE prizes. They had jointly developed an inductive block heating technology based on superconductors which halves the energy consumption required for heating metal. INENSUS GmbH, the IKU winner in 2010, was one of the winners in the EBAE in 2012. It won the award with their concept for the nationwide private-sector electrification of rural settlements using renewable energies.

“We transferred what Muhammad Yunus did in the financial sector with his micro-credit concept to the power supply. [...] We are building a small power station in the village and running cables to the people in their homes. In return, the residents set up a ‘Village Electricity Committee’ – and as soon as they have acquired enough know-how, they can even be the operators themselves.”  Nico Peterschmidt, Managing Director of INENSUS GmbH

The IKU award provides an incentive for companies and research institutes to promote climate-friendly innovations and emission reductions. Thus, it is playing an important role in the green transformation of society. Due to its anchoring at the industry association BDI, the IKU emphasizes the necessity and opportunities of climate action. The active encouragement of applications and awards at European level shows how successfully new approaches for reducing CO2 emissions are taken in Germany.

Positioning the award within a competition offers the opportunity to recognise special initiatives and to make them known to the public. For those who are interested in setting up a competition, the following lessons learned can provide valuable guidance. For the candidate search, as well as promoting the IKU brand and later the prize winners, it is beneficial to make use of the following advertising tools.

At the beginning of the project, Scholz & Friends (in collaboration with Fraunhofer ISI) designed a standardised cross-media advertising campaign with a word/picture mark as a logo. A poster and a leaflet calling for participants in the competition rounded off the advertising concept. A corporate design manual was drawn up to establish the design appearance of the competition.

The project team developed the layout and content of this Internet site along the lines of the advertising campaign. The site informs users about all application methods and provides the necessary application and information documents. The website also features film portraits and explanatory texts about the previous prize winners. In addition, interested applicants can find out more via an info hotline.

The most important channel for reaching a wide range of participants was a flyer with compact data about the competition. The agency updated it to include the respective competitions and mailed it to a thousand companies and associations as well as 2,200 disseminators and multipliers from the business, research and political sectors.

For the IKU 2009, Fraunhofer ISI provided address lists from previous participants of the BDI environmental prize. The Institute searched patent databases for companies that had filed patents. In March 2011, the Institute sent out 2,000 flyers to relevant companies along with the regular newsletter. The BDI informed its member associations via flyers and posters.

Dovetailing the national and European competitions

The IKU is awarded in the European context of the EBAE. By participating in the IKU, applicants can qualify for participation in the European competition and are supported in their application by the IKU team. Taking part in the German contest offers participants the added incentive of measuring themselves against the competition at a European level. With the support of the competition team, German innovations can also make themselves known beyond the national borders. Moreover, synergy effects can be used during implementation for different competitions with the same range of topics.